Colorado Traffic Stops Arrests And Automobile Searches Law is confusing  – What happens at the scene of a traffic stop can mean the difference between a traffic charge, a misdemeanor charge, or a felony charge.  This article addresses what can go wrong at a traffic stop in Colorado. 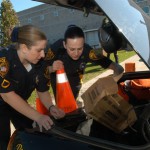 This may be hard to comprehend – but if a police officer intends to use a traffic stop and traffic crime as a pretext to search your car AND he or she has probable cause to arrest you – his or her subjective intent (meaning what is really in his or her mind) even if he or she is using the traffic stop as a pretext to search your case – does NOT make the search illegal.

Here is the rule of law:

Otherwise lawful conduct by law enforcement officers is not made illegal or unconstitutional merely because the officer’s subjective intent is illegitimate.

The Fourth Amendment to the United States Constitution does not prohibit police from making a full custodial arrest and conducting a search incident to the arrest for misdemeanors and petty offenses perpetrated in an officer’s presence.

The Colorado Supreme Court has said that “in assessing a claim of an illegal search resulting from an alleged pre-textual arrest, the subjective intent of the officers conducting the search is not relevant to the inquiry. The proper test is “whether the purpose of the search was objectively reasonable in light of the circumstances confronting the [officers] at the time of the search.”

An Example of This Rule Is Found In The Recent Colorado Case of People v. Patnode

The Facts Of The Patnode Case

Of course traffic errors were made . He was speeding and changed lanes without signaling. At the stop Patnode was asked for his driver’s license, insurance and registration. He could not produce the registration or correct proof of insurance and was also “angry, rude and belligerent.”

He was arrested on the “no proof of insurance” crime – an arrest able traffic crime in Colorado.. and a full search of his car followed.

The police had what they wanted. After Patnode resisted arrest and had to be forcibly placed in the police car. In a search “incident to the arrest” of Patnode of the passenger compartment of the car, the police found a fanny pack which contained several baggies of methamphetamine and other paraphernalia. They had their felony.

Search of the Vehicle – An Inventory Search

A subsequent “inventory search” of the car after it was impounded –  produced more drugs and a written record of drug transactions. An inventory search may be conducted if the vehicle is validly taken into custody, i.e. authorized by the policy of the department. BUT the courts will scrutinize whether departmental policy was followed in truth.

The Colorado Traffic Stop Issue – Was It A Pretext? A Fake? A Ruse? Was It Therefore Illegal?

If the traffic stop and arrest was only a “pretext” for what the Drug Task Force really wanted – a search of the vehicle for drugs – is that a legal search? NO it is not.

Since the police pulled Patnode over after observing him commit several traffic violations and Patnode was unable to produce EITHER the vehicle registration or proof of insurance. He had committed a class one misdemeanor traffic offense. Colorado law authorizes arrests for that level of offense.

Once he was placed under arrest – a “search incident to that arrest” permitted a search of his car.  Once his car is impounded – the police are allowed to do an “inventory search” of the vehicle to detail its contents and to secure the vehicle.

The subjective intent of the narcotic detectives in initiating contact with a suspect does not invalidate the search otherwise justifiable ….so long as detectives had probable cause to believe that a traffic offense had occurred justifying the stop.

Once an occupant is arrested out of a vehicle, officers may search the passenger compartment pursuant to the search incident to arrest theory.

In the Patnode case – the officers not only conducted a search of the passenger compartment of the car finding a black fanny pack in the center console of the front seat, which pack, in turn, contained several baggies that contained methamphetamine, a glass pipe, another pipe wrapped in plastic bubble wrap, and a small digital scale.

But the subsequent inventory search of the vehicle produced a cigarette package containing what appeared to be more methamphetamine and a record of drug transactions, both found elsewhere in the passenger compartment.

Under the Fourth Amendment to the United States Constitution and article II, section 7 of the Colorado Constitution, warrantless searches are considered unreasonable unless they fall under a specifically established and well-delineated exception to the warrant requirement.

The balance of this article addresses two of those exceptions:

(1) The Search Incident To Lawful Arrest – A search conducted incident to a lawful arrest. Under this exception, the scope of the search is generally limited to the person of the arrestee and the area within the arrestee’s immediate control.

Again – here, the traffic officers pulled defendant over after observing him commit several traffic violations. After being pulled over, defendant failed to produce vehicle registration or proof of insurance. In failing to produce the required insurance card, defendant committed a class one misdemeanor traffic offense for which arrest is authorized. Because defendant was lawfully arrested, the resultant search of the vehicle incident to that arrest was authorized and proper as well.

It is well established that “otherwise lawful conduct by law enforcement officers is not made illegal or unconstitutional merely because the officers’ subjective intent is illegitimate.”

Again – believe it or not – “the validity of an inventory search does not turn on the subjective intent of the officer in stopping or arresting a defendant, or on whether the arrest was otherwise pre-textual. Instead, it turns on whether the search is authorized by the policy of the law enforcement agency involved.”

The Impact In Colorado Searches Of Vehicles Incident To Arrest Under Arizona v. Gant –

The recent decision in Arizona v. Gant throws into question what has been known for 28 years – as the New York V. Belton Rule as regards Searches incident To Arrest and Vehicles

In the Gant case – Rodney Gant was arrested for driving with a suspended Arizona driver’s license. He was then handcuffed and placed in the back of a police car. Consistent with the New York v. Belton rule, the arresting officers searched the passenger compartment of Gant’s car. There they found a gun and a bag of cocaine. Gant was later convicted on multiple drug charges. His appeal ultimately reached the U.S. Supreme Court

The U.S. Supreme Court ruled that as a result of Arizona vs. Gant such searches may now be “rarely permissible.”

The court – in the Gant case – may have shut the door on the rules of law reviewed above. It may now expand the rights of individuals to be free from unreasonable searches and seizures by police officer but it also brings uncertainty to an area of the law that had seemed settled for many years.

In 1981, in the case of New York vs. Belton, the Supreme Court issued a broad rule that it deemed “essential to guide police officers” when they made roadside arrests. The court held that “when a policeman has made a lawful custodial arrest of the occupant of an automobile, he may, as a contemporaneous incident of that arrest, search the passenger compartment of the automobile.”

In most states, including Colorado –  the Belton rule has defined the permissible scope of a police officer’s search of an automobile for almost three decades.

The Gant Rule Can Be Stated As Follows:

In the Gant case, the suspect had been handcuffed and secured in the back of a patrol car. Gant thus could not gain access to his automobile. Applying the Supreme Court’s new rule of law, all evidence obtained during the search would be suppressed and Gant’s conviction reversed.

The Gant decision brings uncertainty to an area of the law where none previously existed. Under Belton, once an occupant of a car was arrested, police knew they had the court’s approval to search the interior of the car, whether or not the person under arrest was handcuffed and no matter how close he was to the vehicle.

Under Gant – in Colorado and across the county – the validity of a warrantless search of a vehicle incident to an arrest will turn on minute facts. These may include the number of occupants in the vehicle, how many police officers are present to secure the automobile, whether one or all of the occupants are handcuffed, and the specific distance each person is standing from the vehicle at the time of the search.

H. Michael Steinberg has been a Colorado criminal law specialist attorney for 30 years (as of 2012). For the first 13 years of his career, he was an Arapahoe – Douglas County District Attorney Senior  prosecutor. In 1999 he formed his own law firm for the defense of Colorado criminal cases.

In addition to handling tens of thousands of cases in the criminal trial courts of Colorado, he has written hundreds of articles regarding the practice of Colorado criminal law and frequently provides legal analysis on radio and television, appearing on the Fox News Channel, CNN and Various National and Local Newspapers and Radio Stations.  Please call him at your convenience at 720-220-2277.