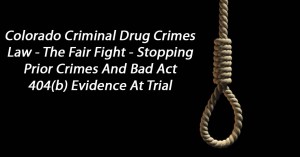 Colorado Criminal Drug Crimes Law – The Fair Fight – Stopping Prior Crimes And Bad Act 404(b) Evidence At Trial – Every person charged with a crime in Colorado should have the right to compel the government to prove the charge against them beyond a reasonable doubt. There are times when this State’s “burden of proof” is made significantly lighter by “cheating.” One method of cheating is using so called “bad character” or “bad acts” evidence to prove the crime charged. The noose represents and almost certain guilty verdict if that happens at trial.

There is a rule of evidence – Colorado Rule of Evidence (CRE) 404 (b)- that permits this unfair evidence to be admitted at trial… If this happens -if 404 (b) evidence is admitted at trial – it can, and often does, takes a very weak case to a significantly stronger case.

An example – You are charged with the distribution of marijuana – you are not guilty and the case is weak. Just before trial, the DA (prosecutor) files a CRE 404(b) motion requesting the Judge’s permission to present evidence of a drug deal you were allegedly involved in three months earlier. The evidence is represented to the Judge as PROOF that you are guilty in the present case based upon one or more of the following theories for the admission of the evidence at your trial under Rule 404(b).

Your defense is the present drug deal never happened, the police informant made it up so that the police officers would pay the informant for the information. You argue against the admission of this other “bad act” and uncharged misconduct evidence would only be admissible to prove that the you are the person who committed this crime.

Since you do not deny that you were present when the alleged drug deal “went down,” the uncharged misconduct of the prior drug deal is not relevant to the trial and will obviously be used to prove that you have an alleged “bad character” and are therefore somehow guilty in THIS – weak case.

Why “Uncharged Misconduct Evidence” Should Not Be Admitted

Another Colorado Rule of Evidence , CRE 404(a) establishes the general rule that the prosecution cannot introduce evidence of uncharged misconduct to prove a defendant’s character in an effort to show that he or she acted in conformity with that character at the time of the charged crime.

The reason for the rule is that in this country we should never convict a person based on who they are or what they have done in the past. The public policy reasons for this are persuasive. If we allow this type of evidence in a criminal trial:

When Judge’s “Justify” The Admission Of Uncharged Misconduct Evidence

Here is the entire rule:

Article IV. RELEVANCY AND ITS LIMITS

Essentially – CRE 404(b) allows the prosecution to introduce evidence of uncharged misconduct for reasons other than proving a defendant’s character.

Trial Judge’s, before admitting this evidence, this “uncharged misconduct” must satisfy that the evidence is relevant to an issue other than a defendant’s propensity to commit a crime because of his [or her] character” AND meets the test for admission.

1. Does the uncharged misconduct evidence relate to a material fact?

[HMS – A material fact is a fact “of consequence to the determination of the action.]

2. Is the uncharged misconduct evidence logically relevant to that material fact?

[HMS – does the uncharged misconduct have “any tendency to make the existence” of the material fact “more probable or less probable than it would be without the evidence?”]

3. Is the logical relevance of the uncharged misconduct independent of the intermediate inference that CRE 404(a) prohibits?

[HMS – is the logical relevance independent of the prohibited intermediate inference that the defendant committed crimes because he or she acted consistently with his or her bad character? There must be a “precise evidential hypothesis” to answer this test.]

4. Is the probative value of the uncharged misconduct “substantially outweighed by the danger of unfair prejudice?”

The Most Common Legal Basis Used To Admit This Evidence Are Modus Operandi and Common Plan, Scheme, or Design

In two types of Colorado criminal cases, sexual assaults and domestic violence cases – the law expressly favors this evidence and the law artificially “heightens” the probative value of the uncharged misconduct and makes this kind of evidence even easier to admit at trial. (HMS – These laws are found at § 16-10-301(1), C.R.S. 2015 (sexual assault); § 18-6-801.5, C.R.S. 2015 (domestic violence);

Two exceptions mentioned in CRE 404(b), modus operandi and common plan, scheme, and design, are often misunderstood. What follows is a brief look at two of the most common reasons for admitting uncharged misconduct

I. Modus Operandi – (Latin for – Method Of Operation)

The “uncharged acts” that are admitted under this standard:

“…. must not only be similar to each other; they must be dissimilar to the methods generally used in such offenses.”

Under this theory the admission of other acts evidence is allowed only for the purpose of identifying the perpetrator of a crime by their “distinctive methodology” and therefore the exception does not apply unless the identity of the perpetrator is at issue in the case being tried.

In our hypothetical (above), evidence of modus operandi is not admissible because the identity of the defendant’s identity is not a contested issue under the chosen defense.

Unlike the modus operandi theory of admission of other acts evidence – a common plan exists when:

“the evidence shows a larger continuing plan to engage in certain criminal activity, and it especially applies in cases where motive, identity of the actor, [or] intent are in dispute.”

To constitute a scheme two or more acts must have a nexus with each other from which a continuous scheme or common design can be discerned. Unlike the modus operandi theory, there need not be a strong similarity between the charged for the uncharged acts to be admissible.

The theory underlying whether the uncharged act is logically relevant is whether it demonstrates a suspect’s ” mental plan.” These other transactions must be so connected in point of time with the offense that is being tried and so similar in character that “a plan or scheme can be imputed as to all of them.”

It is important to note that “similarity alone” is not sufficient to establish a true plan.

It is not necessarily “material” that there are many instances of similar acts committed by the defendant – what makes these acts material is when these acts increase the probative value of the common plan offer of proof.

In our hypothetical drug distribution example above, the identity of the suspect (the Defendant), is not an issue in the trial. For that reason alone evidence of another alleged and uncharged “drug deal” should never be admitted under any 404 (b) theory as the two alleged “drug deals” are independent of each other and therefore the admission of the former act is not relevant and not independent of the impermissible inference that the Defendant has a “bad character” which inference is prohibited under Colorado Rule Of evidence 404.

Never stop fighting – never stop believing in yourself and your right to due process of law. You will not be alone in court, H. Michael at your side every step of the way – advocating for justice and the best possible result in your case.

ABOUT THE AUTHOR: H. Michael Steinberg – Email The Author at [email protected] – A Denver Colorado Criminal Defense Lawyer – or call his office at 303-627-7777 during business hours – or call his cell if you cannot wait and need his immediate assistance – 720-220-2277. Attorney H. Michael Steinberg is passionate about criminal defense. His extensive knowledge and experience of Colorado Criminal Law gives him the edge you need to properly handle your case.

You should be careful to make a responsible choice in selecting a Colorado Criminal Defense Lawyer – and we encourage you to “vet” our firm. Over the last 30 plus years – by focusing ONLY on Colorado criminal law – H. Michael has had the necessary time to commit to the task of constantly updating himself on nearly every area of criminal law, to include Colorado criminal law and procedure and trial and courtroom practice. H. Michael works hard to get his clients the best possible results in and out of the courtroom. He has written, and continues to write, extensively on Colorado criminal law and he hopes this article helps you in some small way – Colorado Criminal Drug Crimes Law – The Fair Fight – Stopping Prior Crimes And Bad Act 404(b) Evidence At Trial. 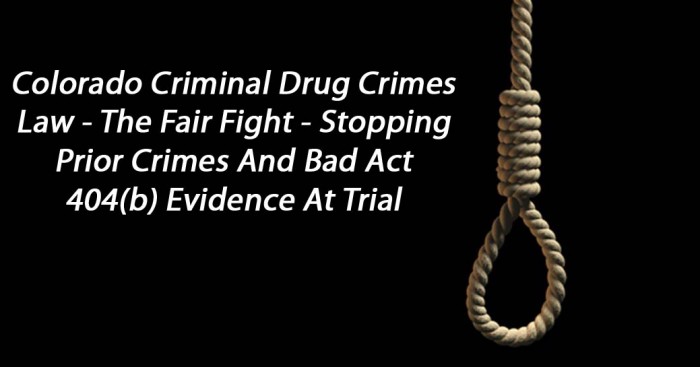 Article Name
Colorado Criminal Drug Crimes Law - The Fair Fight - Stopping Prior Crimes And Bad Act 404(b) Evidence At Trial
Description
Every person charged with a crime in Colorado should have the right to compel the government to prove the charge against them beyond a reasonable doubt. There are times when this State’s "burden of proof" is made significantly lighter by "cheating." One method of cheating is using so called "bad character" or "bad acts" evidence to prove the crime charged. The noose represents and almost certain guilty verdict if that happens at trial.
Author
H. Michael Steinberg