Can An Illegal Police Traffic Stop Lead To An Arrest Because Of An Old Warrant?

Can An Illegal Police Traffic Stop Lead To An Arrest Because Of An Old Warrant? It may seem unconscionable that the police can commit an illegal traffic stop of your car – discover during that stop that there exists an old arrest warrant from your past – then use that old warrant to arrest you.

That is the law. The United Supreme Court has recently held that this seemingly unfair procedure is legally constitutionally permissible.

In response to an unlawful investigatory stop by the police – the role of the Courts is to suppress the evidence that are the “fruits” of that  unlawful conduct by means of a rule known as the Exclusionary Rule.

In the recent United States Supreme Court decision of Utah v. Strieff, the Court held that evidence seized after an illegal stop by the police but part of the search incident to a lawful arrest IS admissible. The reasoning was this: the officer’s discovery of the arrest warrant “attenuated the connection” between the unlawful stop and the evidence seized incident to arrest therefore defeating the application of the Exclusionary Rule.

The purpose of the exclusionary rule, or “the suppression doctrine,” is to prohibit the government from using evidence illegally obtained in violation of the several constitutional amendments (primary among them – the Fourth amendment) against a Defendant in a later criminal proceedings. (See below)

It is standard police procedure when a Colorado police officer lawfully makes a traffic stop to ask for identification. If the officer, discovers, based on that “ID” procedure, the existence of an old arrest warrant for this person’s arrest, the officer has the legal right to make that arrest and conduct a “search incident to arrest.”

If, in the process of arresting and then searching the person stopped, the officer finds illegal controlled substances, as one example, that evidence can later be used against him at a trial for the new charges.

If, on the other hand, the stop or “contact” was illegal, there may be a violation of that person’s constitutional rights, and the Trial Court may then use the exclusionary rule to “suppress” that evidence. The use of the exclusionary rule under these circumstances would encompass both the:

“primary evidence obtained as a direct result of an illegal search or seizure [and] the evidence later discovered and found to be derivative of an illegality.”

Understanding The Fourth Amendment And The Exclusionary Rule

The Fourth Amendment to the United States Constitution provides:

” the right of the people to be secure in their persons, houses, papers, and effects, against unreasonable searches and seizures, shall not be violated, and no Warrants shall issue, but upon probable cause.”

The exclusionary rule is primary tool that the Courts use to enforce the Fourth Amendment’s prohibition against “unreasonable searches and seizures.” While not a rule of evidence exactly – it is used to exclude evidence obtained by unconstitutional police conduct.

This important rule generally prohibits the use of the direct and indirect illegally obtained and referred euphemistically as the  “fruits of the poisonous tree” (the “tree is the government’s misconduct).

However the exclusionary rule is not uniformly applied to ALL police violations of a person’s rights. It is usually applied “where the deterrence benefits outweigh its substantial social costs.” While the primary purpose of the exclusionary rule to prohibit the use of evidence illegally obtained in violation of a Defendant’s Fourth, Fifth, or Sixth Amendment rights, there are exceptions to the rule.

The Three Primary Exceptions To An Application Of The Exclusionary Rule

There are THREE BASIC EXCEPTIONS to the exclusionary rule. These three exceptions are based upon the circumstances that surround the unconstitutional discovery of the evidence in question.

Those three exceptions are:

2. The ‘Inevitable Discovery” Exception and

Utah v. Strieff And The Attenuation Exception To The Exclusionary Rule

The case of Utah v. Strieff explores the exception to the exclusionary rule known as the “Attenuation Doctrine.”

The Attenuation Doctrine exception allows for the admission of otherwise illegally obtained evidence if the unconstitutional police conduct leads to a seizure of evidence – and the seizure of that evidence is either very remote in time or has been interrupted by some legally significant “intervening circumstance.”

Three factors – familiarly known as the “Brown factors” in this context – are applied by a Colorado Trial Judge examine and then decide upon the possible admission of the alleged unconstitutionally obtained evidence.

If the evidence falls under the attenuation rule – the evidence may or may not be allowed at a trial against the Defendant after an analysis applying one or more of the following three factors:

Those three factors are;

1. The Temporal Proximity Factor asks how much time did it take for police to stop the suspect and to arrest him, and what were the circumstances surrounding the arrest?

2. The Intervening Circumstances Factor asks whether some other circumstance such as a confession, or other incrimination information either volunteered by the Defendant or established through some other method, that the Defendant has committed a crime (e.g. the “old warrant” issue)

3.The Flagrant Police Misconduct Factor asks whether the police acted in an unusually brutal or unethical manner to discover evidence, or even more importantly, is there a pattern of misconduct for that officer or police department as a whole?

In the Utah v. Strieff case, the United States Supreme Court found that the “intervening circumstances” factor was met by the discovery of the old arrest warrant.

“The existence of a valid arrest warrant, predating the investigation and entirely unconnected with the stop, favors…attenuation between the unlawful conduct and the discovery of evidence.”

The warrant authorized law enforcement to make the arrest – and once the arrest was authorized by a magistrate’s signature on that warrant, a search incident to an arrest was found by the Court to be “undisputedly lawful.”

Summary And Conclusion – After Utah v. Strieff A Valid Arrest Warrant Will Attenuate The Taint Of An Illegal Traffic Stop And Permit The Police To Benefit From Their Illegal Actions

The Dissent in Utah v. Strieff, pointed out the following failures of the majority’s opinion:

These failures – this imbalance in public policy – is explained in the following excerpts from the opinion:

“the discovery of a warrant for an unpaid parking ticket will forgive a police officer’s violation of your Fourth Amendment rights.”

“If the officer discovers a warrant for a fine you forgot to pay, courts will now excuse his illegal stop and will admit into evidence anything he happens to find by searching you after arresting you on the warrant.”

“If the target[ed] [citizen] is one of the many millions of people in this country with an outstanding arrest warrant, anything the officer finds in a search is fair game for use in criminal prosecution,”

Can An Illegal Police Traffic Stop Lead To An Arrest Because Of An Old Warrant?

The reader is admonished that Colorado criminal law, like criminal law in every state and at the Federal level, changes constantly. The article appearing above was accurate at the time it was drafted but it cannot account for changes occurring after it was uploaded.

Never stop fighting – never stop believing in yourself and your right to due process of law. You will not be alone in court, H. Michael will be at your side every step of the way – advocating for justice and the best possible result in your case.

ABOUT THE AUTHOR: H. Michael Steinberg – Email The Author at hmsteinberg@hotmail.com – A Denver Colorado Criminal Defense Lawyer – or call his office at 303-627-7777 during business hours – or call his cell if you cannot wait and need his immediate assistance – 720-220-2277. Attorney H. Michael Steinberg is passionate about criminal defense. His extensive knowledge and experience of Colorado Criminal Law gives him the edge you need to properly handle your case.

You should be careful to make a responsible choice in selecting a Colorado Criminal Defense Lawyer – and we encourage you to “vet” our firm. Over the last 30 plus years – by focusing ONLY on Colorado criminal law – H. Michael has had the necessary time to commit to the task of constantly updating himself on nearly every area of criminal law, to include Colorado criminal law and procedure and trial and courtroom practice. H. Michael works hard to get his clients the best possible results in and out of the courtroom. He has written, and continues to write, extensively on Colorado criminal law and he hopes this article helps you in some small way – Can An Illegal Police Traffic Stop Lead To An Arrest Because Of An Old Warrant? 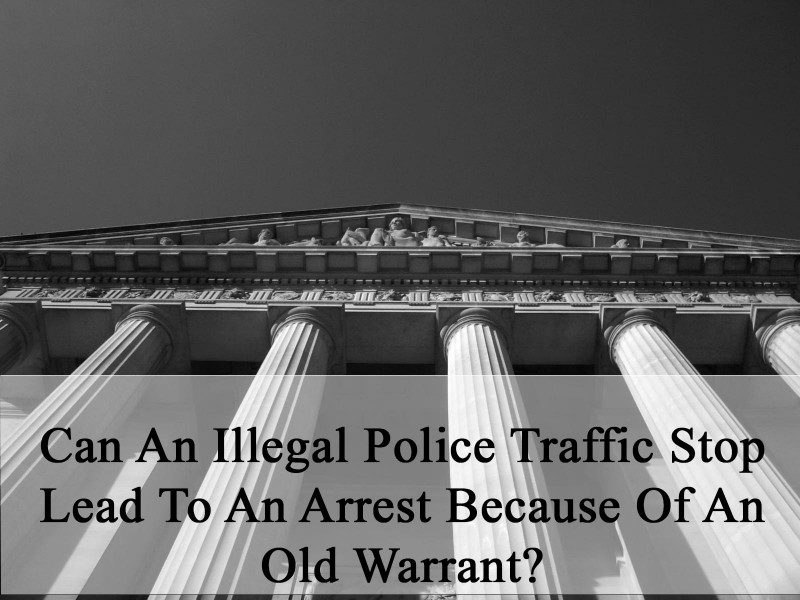 Article Name
Can An Illegal Police Traffic Stop Lead To An Arrest For An Old Warrant?
Description
It may seem unconscionable that the police can commit an illegal traffic stop of your car - discover during that stop that there exists an old arrest warrant from your past - then use that old warrant to arrest you.
Author
H. Michael Steinberg